A total of 32 members took part in this years Dublin City Marathon. Some fine times were posted in the windy conditions… 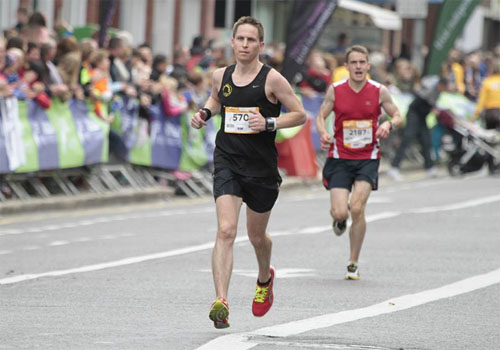 Alan O’Brien…2:46 in the Dublin Marathon 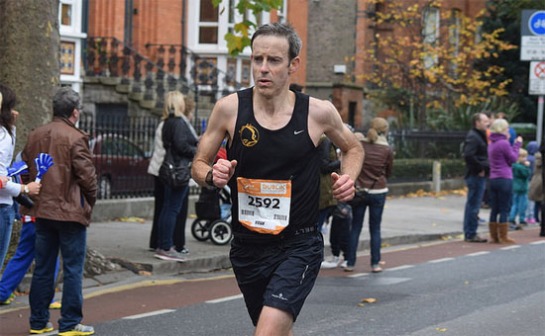 Vivian Foley breaking the 3 hour barrier for the 2nd time

A full list of times and splits can be seen HERE

Deirdre O’Reilly 5k : This charity 5k race organised by Bandon AC was held in wet conditions on the afternoon of Sunday the 26th of October 2014. Congratulations to club member Elaine Guinane on winning her first road race! 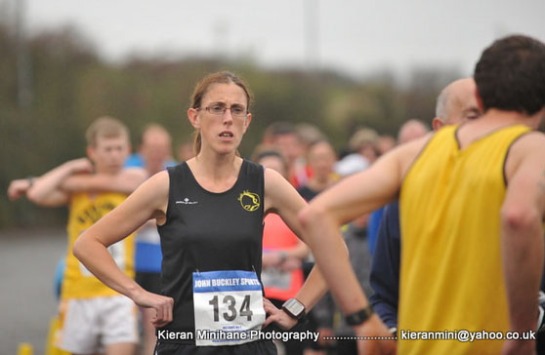 Lee Fields 4 mile race : This new 4 mile road race was held on the morning of Sunday the 26th of Oct 2014. The club names were not given in the results but these are a few members that we picked out. If you know of any others then let us know. 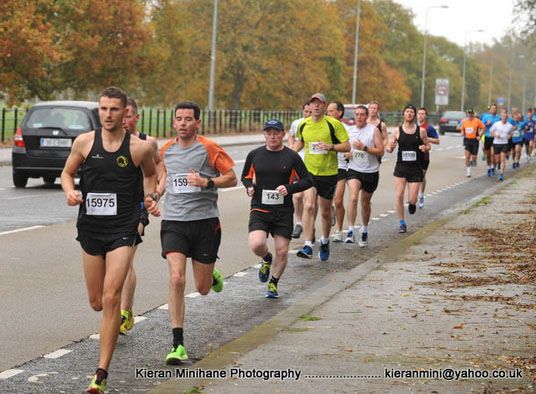 Club member Derek Costello travelled to Germany last month to take part in the 2014 Berlin Marathon. This is his report… 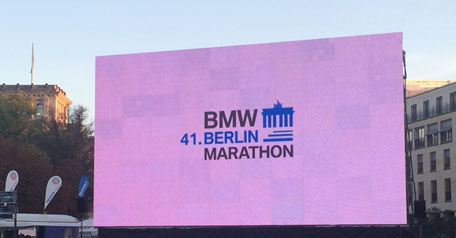 This time last year, the lottery for the Berlin marathon opened and I entered it .I had also entered the lottery for the New York and London marathons hoping to get at least one of them. In the end, I ended up getting all three of them and Cork thrown in for good measure as well! Berlin has become one of the most popular marathons in the world and is usually hard to get into. I was just one of the lucky ones to get it along with the other 40000.

A big draw back this year was the fact that Cork airport now has cancelled all its flights to Berlin. So it was a case of taking the bus to Dublin on Friday evening, staying in a hotel in Dublin Airport overnight. I then caught the early flight on Saturday morning to Schönefeld Airport in Berlin and then from there, a train to the Expo. I was lucky enough to meet up with a few Dublin lads who knew the way. If anyone reading this is ever thinking of going then go on a Friday as it is a lot of travelling for one day . The Expo itself was very good and it took me about 3 hours to get around it . 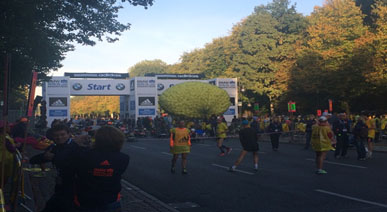 There was a great buzz on morning of Marathon. It was ideal weather in the shade but it got very hot as the race went on. As this was my 4th Marathon in 11 months, I was hoping the heat would not affect me like it did for the London Marathon back in April. The start went really well and it went off about 10 mins after the first wave . The first 8 miles just flew past. It really is a very flat course with only a small few pulls but nothing worth talking about. The water stops were a pain as it was only plastic cups which were tricky to drink from and under foot were very slippery as the cups were everywhere. The spectators were brilliant with a lot of bands playing around the route. From around mile 10, the weather started to get very hot so I started walking at the water stops to make sure I got enough liquid on board. 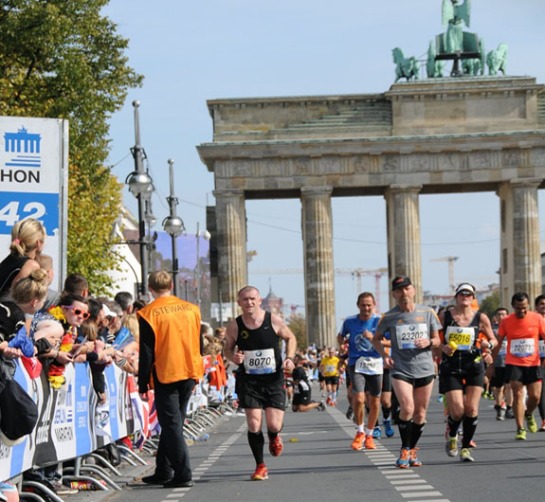 The course was very congested but I was able can still run ok at my own pace . I was still with the 4hr pacer up to mile 22 until my thigh muscle tightened up which was then followed by the calf locking up . I was hoping for a personal best but alas, it was not to be. In the end, I finished in 4hrs 21 mins. Not exactly what I was hoping for but I still got there in the end. Coming under the Brandenburg Gate at 42 kms, there was a big screen on my left showing the runners finishing. There were thousands cheering the runners on and calling out come on “Eagle“ made it all worth the pain :o) 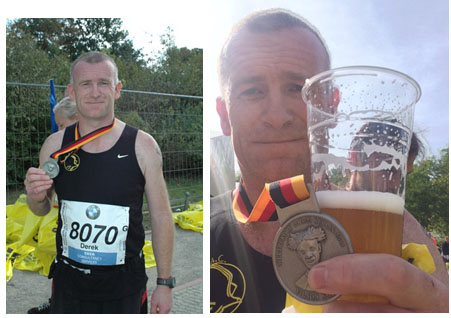 Overall it was a very enjoyable race, very flat and it was great to be in a marathon where the world record was set. The shower straight after the race was handy as I stayed around for awhile and enjoyed the food, craic and a well deserved drink. I am hoping to do it again next year all going well. The lottery for 2015 has now opened.

A number of members of the club are currently planning to take part in the Liverpool Half-Marathon which will be held on Sunday the 29th of March 2015. This race had 6817 finishers in 2014 so it’s one of the bigger half-marathons in the UK. It costs £36 to enter until the 31st of December and then it’s £37 until the 28th of Feb 2015.

A map of the course can be seen HERE 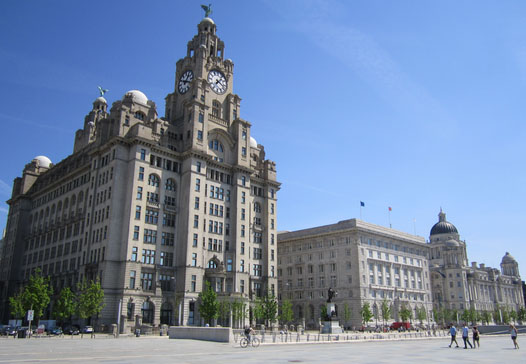 Following on from the success of the Eagle AC teams in the Cork Cross Country Masters Championships last weekend in Conna, this week the club was in action at the Novice ‘B’ championships. The venue was just up the road in Castlelyons and there was a sizeable team from the club present. In almost ideal conditions, the mens team secured second place to finish just behind St.Finbarrs. 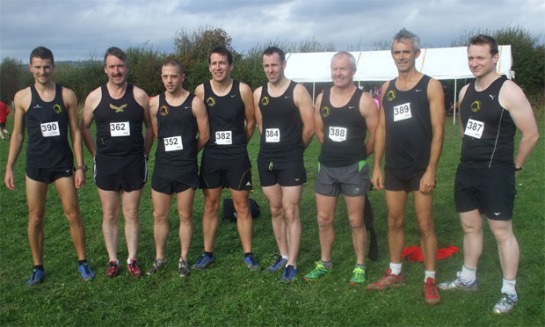 Rebel Run 10k : The LeisureWorld Rebel Run 10k race was held in Bishopstown on Sunday the 19th of October 2014. We had a small number of members taking part with Ed Fitgerald acting as a 1 hour pacer for a small group. 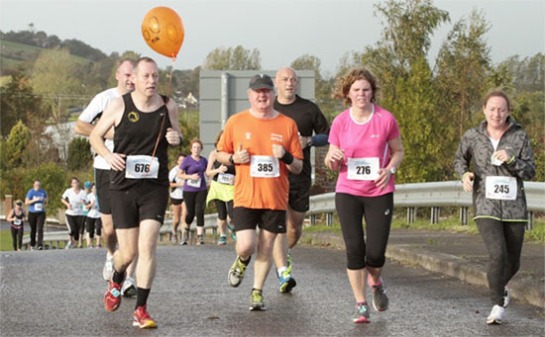 Feet First 5k : On Saturday the 18th of October, the first race in the Feet First Winter Series was held in Killarney, Co.Kerry. We had 4 members taking part with the husband and wife team of Eugene and Adelle O’Connor finishing second in the M45 and F40 categories respectively. 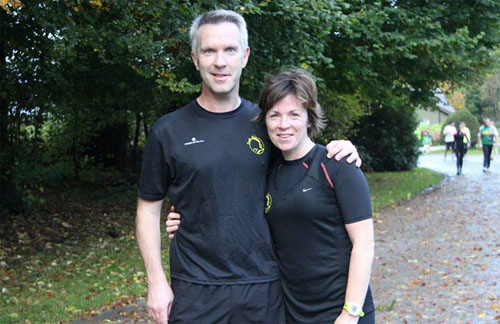 The Kaiser Mountain Marathon takes place in and around the ski resort of Soll, Austria in the first week of October as part of the Tour of Tyrol 3 day running festival. Essentially it is a marathon of two distinct phases with the course in the first half going along the valley floor and passing through the nearby towns of Scheffau and Ellmau before ascending into the mountains. 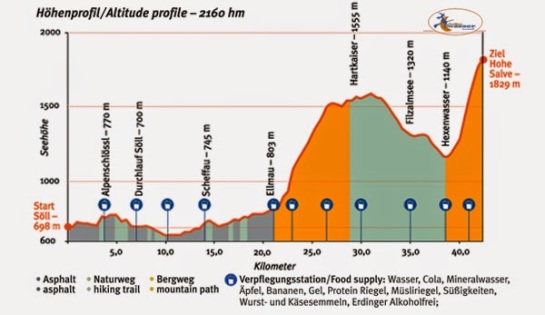 The first 3 miles contain a number of short hills with runners then descending to the lowest elevation of 650 metres at about the six mile point. The course then progresses along the valley floor,over six miles, to the starting point of the first serious climb before the 13 mile mark with runners climbing from 700 metres to 1555 metres over 6 miles.The course then descends rapidly to a low point of about`1250 metres leaving a climb of nearly 600 metres in less than a mile. The last mile is the most challenging phase with runners essentially reduced to a walk to reach the finish line at 1,829 metres. Return to race HQ is by ski lifts. 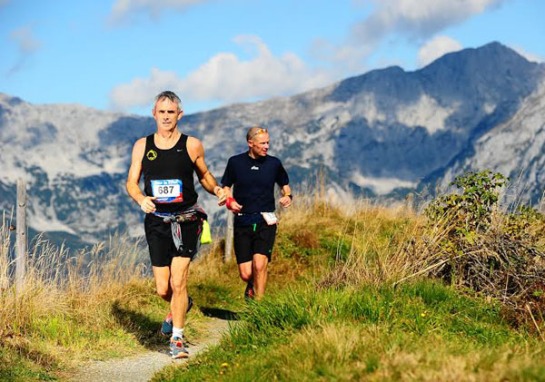 The terrain encountered varies widely with tarmac paths along the valley floor, mountain roads leading to narrow rutted trails and steep grass slopes on the upper sections. Visually, it is quite a beautiful course with some breathtaking views on the middle and upper sections.
The weather was wonderful with bright sunny skies, no winds and, most importantly, a dry course.. The organisation was also great with more water/fuel stations than in any marathon I have previously run in including having soup and small sandwiches at the higher stations. Total number of participants was 498 drawn from over 20 countries. 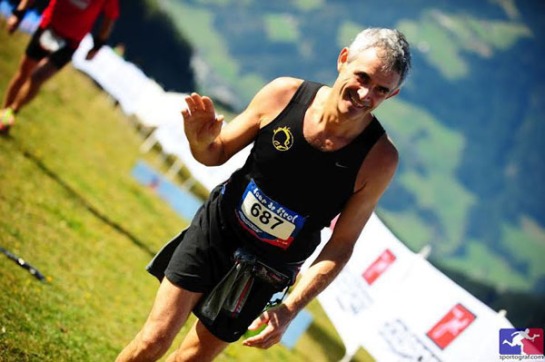 One of the more memorable moments of the race came at the 18 mile point when the course literally went through one of the mountain restaurants with the diners inside clapping and cheering. Other than the high profiles marathons such as Zermatt in Switzerland which attracts thousands, numbers of around four to six hundred participants seems typical of mountain marathons and runners are predominantly male.

This was my second attempt at running this marathon with my first in 2011 when I travelled there carrying injuries. On the race morning the top of the mountain was snowed in with heavy rain on the lower section and the race itself was diverted away from the top half. After a short run, I decided to withdraw and, in retrospect, it seems like the right decision.

With a reduction in flights from Cork airport, travelling to races in Germany and Austria is becoming more difficult and this case, I travelled via Shannon to Memmingen (Munich) and onwards to Soll by train and bus.

The Cork Masters Cross Country Championships were held near the town of Conna in NE Cork on Sunday the 12th of October 2014.  In total, the club had 13 members taking part…4 in the womens event and the balance of 9 in the mens. 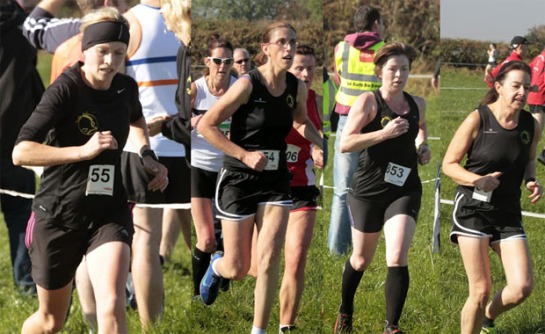 The full results can be found on the Cork Athletics County Board website. 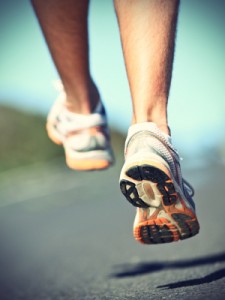 As well as being one of the largest athletic clubs in Cork City, it’s probably safe to say that Eagle AC organise more training runs than most other clubs. To help illustrate this, Gerard Down has kindly gone back through all of the club e-mails for the summer and compiled the list below which shows all of the club runs between June and August 2014. It amounts to an impressive 58 in total and that doesn’t include any track sessions at CIT on Tuesday or Thursday evenings or other informal smaller runs that members organise themselves.

The review period which comes after the Cork City Marathon was probably no busier than any other time of the year. Taking the year as a whole, the club probably organises somewhere between 200 to 250 training runs per annum.

Athletics Ireland released some stats today showing the various membership numbers for all the athletic clubs in Ireland. Eagle AC had 189 members at the end of October 2014 which is a record membership for the club. The club has grown by 17% since the end of 2013 and there are still 3 months left on the calendar.

As can be seen from the chart above, the club has grown steadily for the last few years…from 115 at the end of 2011 to 189 now. Based on the number of adult members, the club is now the third largest in Co.Cork.