The National Masters Track & Field Championships were held in Tullamore last weekend with several club members taking medals. We have reports below from Pat Murphy and Ken Higgs…

Report by Pat Murphy….
Last weekend 5 members travelled to Tullamore for the National Masters Track & field Championships. It turned out to be another successful day as 9 medals were won in very competitive events.

First into action was Hugh Mc Sweeney in the M70 100m and he set the trend winning the silver medal in a time of 14.76sec. Hugh was next to go again this time in the 200m and he got his second silver of the day in a time of 30.77sec.

Neil Kingston was next to go in his first event of the day the M45 800m. Neil sat in the bunch all the way and was well placed when the sprint for the finish started. He powered down the home straight to take second in a time of 2.12.32. Eagle’s third silver of the day.

Pressure was now on Ken Higgs as he lined up for the M65 800m. It was always going to be a battle for the silver and bronze medals in this as with Joe Gough (World Masters medalist) running he was assured of the gold. From the start Gough went to the front and opened up a gap on the rest of the field which he held all the way to the finish. Ken bided his time at the back of the chasing pack and down the back straight for the last time started to move closer to the front and when he hit the finishing straight he left the rest in his wake finishing in 3.44.11. Eagle’s fourth silver of the day.

5000m was next with Richard Piotrowski going in the M70 category. They combined M60, M65, M70 and M75 in the one race which caused confusion for the officials counting the laps as Tommy Payne the winner of the M60 category lapped practically everyone else in the race and some more than once. Richard’s main M70 competitor was Martin McEvilly from Galway and both ran together early on. With about 5 laps to go McEvilly opened a gap on Richard which he extended to approx. 20 – 30 metres over the next 4 laps. Just as it was looking that it was going to be a fifth silver for Eagle McEvilly stopped thinking he was finished. Richard came through got the bell and carried on and did the final lap while McEvilly was sitting on the track removing his spikes. Another runner that stopped as well was Neilus Ahern of Midleton but when he realised he had another lap he jogged around to finish the race. When the results were first published it had McEvilly in first and Richard second but official results published later had Richard in first. Richard’s finishing time was 21.22.96. Eagle’s first gold of the day. 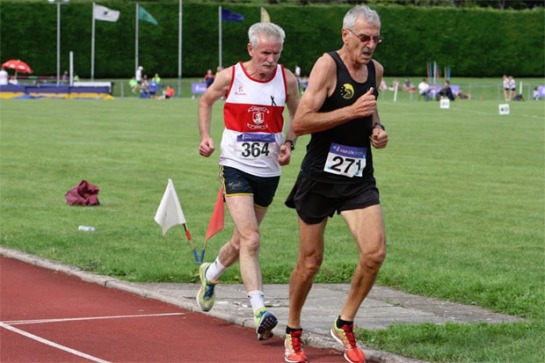 While the 5000 was on Hugh was competing in his last event the M70 Long Jump. Hugh showed his rustiness at this event as on his first three jumps he was taking off well back from the board. He managed to correct it on his fourth and final jump and took his third silver of the day with a jump of 3.37m. Eagle’s fifth silver medal.

Neil went in his second event the M45 400m. Coming off the final bend Neil was in second place and try as he might could not pull back the leader and had to settle for second finishing in 58.36 to take his second and Eagle’s sixth silver medal.

Ken was up next in the M65 400m. Running in the outside lane he kept his focus and when the stagger unfolded he was in front and held it all the way to the finish to take gold in 70.99. Eagle’s second gold.

Last events of the day was the 1500m. I was surprised to see Neil line up for this as he was feeling the effects of his two previous events. The M40 and M45 was combined into one race. He sat at the back of the group for the most of the race and it was his finishing kick that got him up take the bronze for his third medal of the day in a time of 4.48.74. Not bad for a first timer at Nationals.

So at the end of a long day a medal haul of 2 Gold, 6 Silver and 1 Bronze must count as a good day out.

Report from Ken Higgs…
Eagle AC had a very successful day at the National masters Track and Field championship that took place in warm and very humid conditions in Tullamore on Saturday.

Photos courtesy of Kieran Carlin up on the club Facebook page.