Back in 2016 I got accepted for a place at the Tokyo 2017 marathon, which set my new goal for running for the next few years.  I had read about the Six Star medal for completing the marathon majors (Berlin, Boston, Chicago, London, New York and Tokyo).  I felt Tokyo was the hardest logistically, so with that planned it seemed like a decent mid-life crisis decision to go for them all.

The registration for New York came around in January 2017 and I went for a fast qualifier entry.  The qualifying standard would be achievable for a few Eagles, particularly the half marathon time (1:23 for the 35-39 category).  It does not guarantee entry though, so make sure you register as soon as the entry period opens.  I got confirmation of my place not long before the Tokyo marathon, which was not a great race for me.  Thankfully I had an entry for London that let me make amends.

I came back from London with a new PB but lacking in motivation to get back training and struggling to see how I could improve.  This is when I joined Eagle AC.  The next 18-20 weeks training with the Dublin marathon guys were some of my most consistent, both in terms of speed and mileage.  I also targeted a few shorter races that helped build confidence that I was going in the right direction.

By the time New York came around in November I felt I was in decent shape although taper madness was in full swing.  I travelled across with my wife from Shannon to New York on Friday (with the marathon on Sunday).  I would say it was a day too late and would recommend an extra day to prepare.  With time zone changes it meant I was trying to fuel up on pasta at ~3am (Irish time).

We stayed just south of Central Park.  The finish line is in Central Park itself, which means you don’t have far to stumble for a shower afterwards, and you are close enough for most modes of transport for getting to the start line.  New York is not a cheap place to stay during the marathon, the rooms can be small and you will struggle to find a room with a bath.  However, I would definitely advise staying in Manhattan and not across near the marathon start.

After a few miles to loosen up in Central Park on Saturday I headed out to get my number at the Expo.  Not as big as London and not as crazy as Tokyo, but well organised.  The normal stands and stalls with gadgets galore that will “improve your run”, but don’t waste too much energy there.

The hotel I stayed at did not serve early breakfast, but I had found a nice 24 hour diner.  I also scouted the route to the bus that would get me to the start line.  You have the choice of bus or ferry/bus to get to the Verrazano Bridge.  I had read that the ferry is a good “tourist” option, but the bus is more efficient (leaves from the NY library, which is walking distance from a lot of hotels).

Marathon day arrived.  I woke up bright and early ~4:30 to get to the bus at ~6am.  Got ready and headed to the diner, dragging the wife along as I am sure she was pleased to be out at 5am.  I left for the pick-up point, arriving at 5:45 thinking I had loads of time.  I was wrong though.  I walked from North Manhattan down 5th Avenue.  Here you get herded into a queuing system that seems never-ending.  If you had come across from Broadway along 39th Street you would have avoided most of this.  I finally got on a bus ~6:15.  This was still OK though as I had read the bus takes ~90 mins.  However, two hours later I got off the bus at the Verrazano, still needing to get through security.

My race corral opened at 8:20, just as I got through security.  I sprinted in and straight to the nearest toilet!  You have the choice of dropping off a bag, or getting a post-race poncho (and no bag drop-off).  I chose the latter and was glad as I would have struggled to drop off a bag in the time I had.  Please don’t underestimate the time to get to the start, especially if in the first wave.  I met a lot of folk who had decided to travel up to 2 hours early (based on their start time) for the experience, but that really clogged things up for the faster runners.

The corrals themselves were quite small and cramped, with little room to warm-up.  At ~9:10 they moved us out to the start line on the Verrazano Bridge.  I was on the upper level (orange start) and for 40 minutes you are left fully exposed to the elements.  I saw a few folk in just singlets and they were visibly shivering.  I would recommend wearing something warm and disposable until the last possible moment.  Any clothes discarded are donated to local homeless charities. 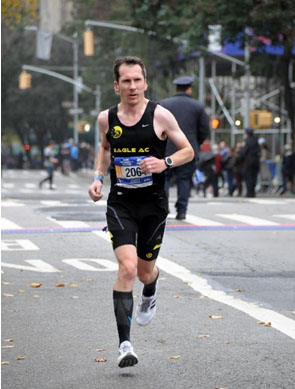 As the minutes ticked down the typical nerves kicked in.  We cheered the elite ladies who started at 9:20, with another 30 minutes until the rest of us. With a minute to go I got rid of the last of my layers and the Eagle singlet came out (Thanks Tim!)…. although no-one applauded.  Bang and the race was under way.  I had read that you should not race the first mile as it is all uphill.  It was definitely good advice to ease it back by around 20 seconds and make it up on the other side.  I pushed on to a group and stuck with them, giving a first mile of 6:10.

I remember looking across near the mile mark to see I was level with Kipsang.  To be fair he had started ~300m back at the Blue start, but still.  Once you clear the bridge it becomes a bit uneventful.  It is essentially a straight wide road for 6 miles, with a number of small ups and downs (not easy to get into a rhythm).  It didn’t help that one person decided to use me as a wind-breaker and clipped me 3 times.  A few friendly words (international diplomacy) and I was on my own.  I never expected the course to be so quiet.  It picked up at 8 miles and was great to see my wife here.

Despite everything I had told myself I had went off way too fast.  Just before leaving Brooklyn I went through half at 1:16:40, already slowing.  In Queens I thought I had settled a bit, but the bridge over to Manhattan at 15 miles hurt badly.  It was a decent incline and I passed a few folk but I think I knew from that point that I was struggling.  The entry to Manhattan was very loud and I recovered a bit.  My wife had made it round to 17 miles and I managed a thumbs up, but 16 – 20 miles is straight up 1st Avenue, never-ending and looks as if it drags all the way.  By 19 miles I was already in survival mode making deals with myself.

For the next 5 miles I just kept going and knew it was getting worse.  Over to the Bronx and more bridges.  I remember one sign coming back onto Manhattan that said “Last Damn Bridge”, which raised a smile.  The rest of the way back down towards Central Park was painful, culminating in a mile of 6:40.  Seeing my wife again at ~25 miles gave me the final lift to keep going.  The last mile is tough enough though and the route to the finish is uphill.  I pushed on after a couple of guys and crossed the line in 2:38:54. 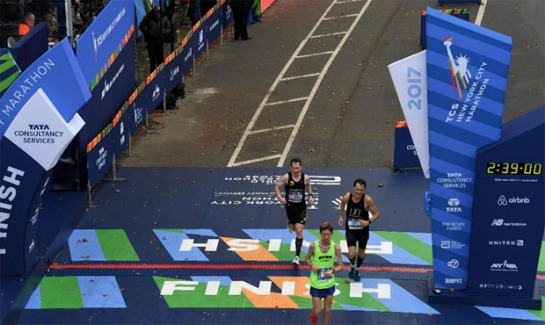 I was glad to finish under 2:40, although a bit disappointed at the time.  I don’t think I really took on board how challenging the course was.  My race plan should have been better, but lots of lessons learnt.  Later I found out that I was the 106th male home (including the elites) and 20th in my age category.  For one of the majors that is pretty good.  The walk to the meeting point was painful, but a load of people with a smile and a kind word of congratulations helped.  On the way I picked up my nice warm poncho (highly recommended!)

New York really embraces the marathon with the city taken over in the evening with runners wearing medals.  However, I still saw people wearing medals three days later, which might have been milking it a bit.  Look out the day after the marathon for the NY Times, which includes a marathon special, including your name/finishing position.  If you go to the Jack Rabbit store at the bottom corner of Central Park on Monday they will engrave your medal for free with your name and finishing time (which would cost ~$25 if you go to the official pavilion, with a massive queue).

So 3 majors down and 3 to go.  I don’t think New York would be one I would repeat, although I am really happy to have done it.  Boston, Berlin and Chicago planned for 2018 (if I can stay injury free) and then put out to pasture!